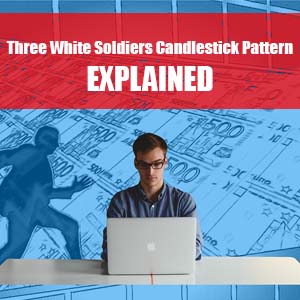 The Three White Soldiers is a reversal pattern that indicates the possible ending of a current downtrend. It compromises of three long bullish candles.

What is the Three White Candlestick Pattern?

The pattern’s three candles don’t have a long wick and open within the previous candle’s real body. Also, it emerges in a downtrend.

The first of these candles is called a reversal candle. It either suggests the ending of a downtrend or tells that the period of consolidation (an indecisive period which ends when the price moves above or below current prices) has come to an end.

The second candle is more significant than the first candle. It closes near the high, showing a small or no wick.

The last candle is longer or equal to the second candle. It has small or no wick.

When a candle closes with a small or no wick, it describes that the bulls have managed to keep up the price.

The overall development of the pattern symbolizes three advancing soldiers. And it was called three marching soldiers up until the Second World War.

Sometimes, the Three White Soldiers Candlestick Pattern appears after another reversal pattern, such as Doji.

Here’s what the Three White Soldiers Candlestick Pattern looks like on a chart:

The inverse of the Three White Soldiers is the Three Black Crows Candlestick Pattern. It shows that bears take control from the bulls, signaling a reversal.

Both Three White Soldiers and Three Black Crows rarely appear on the forex charts. You can spot these candlestick patterns on long and short term timeframes. They can appear on forex currency pairs, stocks, indices, cryptocurrencies, commodities, metals, energies, gold, silver and more.

How to use the Three White Soldiers Candlestick Pattern?

When the pattern surfaces, those who are on the short side, may look to exit the trade, while traders looking to go long, may start to consider an entry.

When trading the pattern, a trader should know that the pattern’s sharp rise can create an overbought condition. For example, the Stochastic Indicator can go above the 70 level.

Also, there are situations when the Three White Soldiers are present, but the price goes down. This may not be a suitable entry time.

One thing to look for is the volume of the pattern. If the pattern has a low volume, the Three White Soldiers may also not be worthy of a trade. You can use the volume indicator to measure current market volume.

To solve this problem, a trader can wait for the formation of the pattern near the resistance level, until there is a breakout confirmation, and then start a buy trade.

The Three White Soldiers Candlestick pattern can be found on daily, weekly, and monthly charts. So, it can be used for forex day trading and forex swing trading.

For a more complete forex trading strategy, the Three White Soldiers can be used with other technical analysis.

The Three White Soldiers Candlestick Pattern can be used on your trading platform charts to help filter potential trading signals as part of an overall trading strategy.

I would prefer to use the majority of candlestick patterns such as the Three White Soldiers Candlestick Pattern on the 1-hour charts and above. I tend to find that these charts contain less market noise than the lower time frames and thus give more reliable signals for my forex trading strategies. This also means that I spend less time staring at charts and can also set alert notifications to let me know when price has reached certain levels, candlestick pattern has been formed or a particular indicator value has been reached.

The Three White Soldiers Candlestick Pattern is just one method of market analysis amongst thousands. I would not build a trading system alone, but rather combine with other technical indicators such as moving averages, Parabolic SAR, Stochastic Oscillator, RSI, ADX and price action analysis.

The methods of implementing the Three White Soldiers Candlestick Pattern into a trading strategy that are outlined within this article are just ideas. I would always ensure that I have good money management, trading discipline and a trading plan when using any forex strategy.

If you would like to practice trading with the Three White Soldiers Candlestick Pattern, you can open an account with a forex broker and download a trading platform. If you are looking for a forex broker, you may wish to view my best forex brokers for some inspiration.