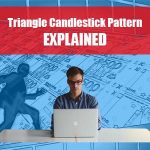 The Triangle Candlestick is a continuation pattern. It forms when price moves into a tighter range depicting combat between the bulls and the bears. What is the Triangle Candlestick Pattern? The Triangle acts as a Horizontal Trading Pattern. It shows wide points at the initial stages, and as the price continues to move, the trading range becomes narrow, forming a triangle. There are three types of Triangle Pattern; ascending, descending, symmetrical. Ascending Triangle The Ascending Triangle is a breakout pattern that appears when the price surpasses the resistance level. The resistance level is a horizontal line, forming a slope of …READ MORE