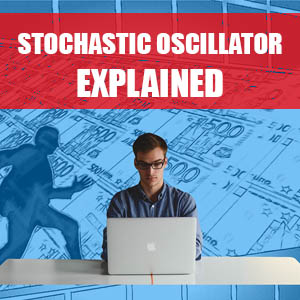 George Lane, president of Investment Educators Corporation, developed the Stochastic Oscillator indicator in 1950s. All calculations were manually performed, and a group of traders had formed formulas for oscillators, sequentially giving them the names % A, % B, % C, etc. Only three were operational: % K, % D and% R.

What is the Stochastic Oscillator indicator?

The % K and % D are the first two curves known as stochastic Lane, and the last (% R) is named after Larry Williams. Another variant of the origin of the names of the stochastic indicator lines: % K – from the name Kelly (middle name of George Lane), % D – from the word deviation.

A stochastic oscillator is an indicator of the rate of change of momentum of a price. Stochastic estimates the speed of the market by determining the relative position of closing prices in the range between the maximum and minimum for a specific number of days. The indicator takes the current price and subtracts the price from it, which was a few days ago.

Like, a 14-day oscillator takes into account the position of closing prices within the entire range between the maximum and minimum for the previous 14 days. Stochastic expresses the relationship between the closing price and the high-low range as a percentage from zero to 100.

Simply said, if you see a 50% indicator, then this means that the closing price lies precisely in the mid between the top and bottom. If the indicator is 75%, it would be at 75% of the daily range or closer to the maximum than to the minimum.

How to trade with the Stochastic Oscillator indicator?

Stochastic Oscillator consists of two lines: fast, called% K, and slow, called% D. The second is the most significant since its dynamics and can be used to judge the most critical changes in the market. Stochastic Oscillator analysis determines the location of the closing price relative to the price range for a specified period. The most common calculation period for this Oscillator is five days.

A short period of stochastic Oscillator allows you to detect more turning points, and a more extended period – to identify the most critical turning points.

Curve K is depicted on the graphs by a continuous line, and the slower curve D by a dashed line.

When making trades on forex using the strategy for the Stochastic Oscillator and tactics for the corresponding execution of transactions, which are based on a stochastic indicator, the following rules can be observed:

Bearish divergence (divergence) occurs when curve D is above 80 and forms two peaks, and prices continue to rise.

Bullish divergence (divergence) is formed when the D curve is below 20 and forms a double rising base, and prices continue to fall or standstill.

Stochastic is indeed a popular forex trading indicator but like any other indicators, it needs to be tested so that it can be correctly used. Since this is an oscillator, therefore, you may use any volatility or trend indicator with the setup to add further confirmation in your trade setups.

If you would like to practice trading with the Stochastic Oscillator, you can open an account with a forex broker and download a trading platform. If you are looking for a forex broker, you may wish to view my best forex brokers for some inspiration.