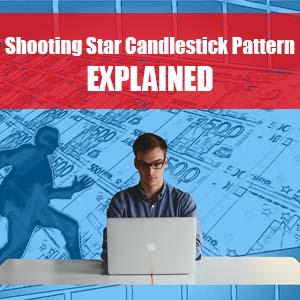 The Shooting Star Candlestick Pattern is a bearish reversal pattern. The candlestick comprises of one candle which has a long upper wick and little or no lower wick.

What is the Shooting Star Candlestick Pattern?

The Shooting Star appears in an uptrend and signifies a drop in price. When the price advances and shows a sudden drop, it leaves behind a long upper wick. This upper wick should be half of the length of the Shooting Star.

Also, the upper wick represents the buyers who were in a strong position during the day, but now they may be losing control because of the price drop.

Here’s what the pattern looks like on a chart:

The pattern can appear regularly on the forex charts. After the price reversal, you can notice lower lows and lower highs.

In some situations, the price continues to rise after the appearance of the Shooting Star. Here we could wait for the price action and go long.

How to use the Shooting Star Candlestick Pattern?

Once spotted, the Shooting Star pattern can give signals for going short and some traders may set the stop-loss near the recent swing high.

A conservative trader might wait for a while and enter the trade in the middle. This means a trader is looking for a shorter trade, possibly with the tighter stop-loss.

However, the pattern is not flawless and requires the use of other technical indicators to confirm the signals.

Even though the Shooting Star is present, the prices continue to rise. In this situation, you could use momentum oscillators like the Stochastics or RSI to determine the overbought level.

In the chart above, you can notice that the Shooting Star is telling an overbought condition. The bulls were dominant, but right after Shooting Star’s appearance, the Stochastic is showing a drop in price levels, defining an oversold situation.

But as we already mentioned, it may not be wise to rely solely on the Shooting Star for a forex trading strategy. We could use other methods of technical analysis for confirmation.

The Shooting is bearish in nature, so it presents sell signals.

The Shooting Star Candlestick Pattern can be used on your trading platform charts to help filter potential trading signals as part of an overall trading strategy. Many consider the Shooting Star a simple tool for helping to identify price reversals.

I would prefer to use the majority of candlestick patterns such as the Shooting Star Candlestick Pattern on the 1-hour charts and above. I tend to find that these charts contain less market noise than the lower time frames and thus give more reliable signals for my forex trading strategies. This also means that I spend less time staring at charts and can also set alert notifications to let me know when price has reached certain levels, candlestick pattern has been formed or a particular indicator value has been reached.

The Shooting Star Candlestick Pattern is just one method of market analysis amongst thousands. I would not build a trading system alone, but rather combine with other technical indicators such as moving averages, Parabolic SAR, Stochastic Oscillator, RSI, ADX and price action analysis.

The methods of implementing the Shooting Star Candlestick Pattern into a trading strategy that are outlined within this article are just ideas. I would always ensure that I have good money management, trading discipline and a trading plan when using any forex strategy.

If you would like to practice trading with the Shooting Star Candlestick Pattern, you can open an account with a forex broker and download a trading platform. If you are looking for a forex broker, you may wish to view my best forex brokers for some inspiration.