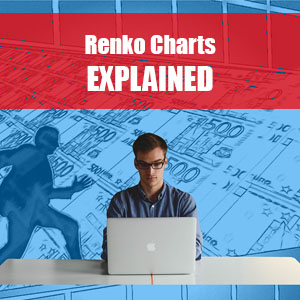 The Renko charts were developed in Japan, and the word Renko comes from the Japanese word for bricks, “renga.” This is because the structure of the Renko charts looks like a series of bricks.

What are the Renko charts?

The Renko charts compromise a series of bricks; each brick moves with the price movement at an angle of 45 degrees. The movement of bricks can be up and down depending on the direction of the price. An up brick is colored as green or white, and a down brick is colored red or black.

The bricks can be of any price, and this is called a box size. When the price moves out of the box size, Renko charts present to buy or sell signals. For example, if a currency pair has a box size of 100 pip, the Renko chart will place a brick in the next column when the previous brick’s price has surpassed the box size amount.

At first glance, Renko charts look exactly like candlestick charts. However, both are different in construction and specifications.

How to use the Renko charts?

As the chart below illustrates, when the trend occurs on the Renko charts, there is a possibility that it can go on for long, even if there is a brick in the opposite direction.

Renko charts produce an entry point when the color of a few bricks changes. For example, when seeing red bricks changing to green bricks, a trader may decide to enter long. Alternatively, if red bricks continue, he/she may go short.

When a different color brick emerges in a series of same-color bricks, there is a pullback chance. A trader can enter after the pullbacks and exit when bricks change their colors.

One way to utilize the Renko charts is to use ATR (average true range) with the bricks pattern. The ATR is a technical indicator that measures volatility. When used on the Renko charts, the ATR values should be considered as the box size.

As Renko charts are time-independent, the display of bricks is not fixed. For example, a brick could take several months to appear, or there could be several bricks formations in a day. When devising a trading strategy, traders should look into this factor.

Becoming a successful forex trader can take many years of practice. It is not easy to make a living from forex trading in my opinion. It will require immense trading discipline, good money management, and a bullet proof trading plan.

The methods of trading forex that are outlined within this article are just ideas. You should trade forex in a way that suits your own individual style, needs and goals.

If you would like to practice forex trading online, you can open an account with a forex broker and download a trading platform completely free of charge. If you are looking for a forex broker, you may wish to view my best forex brokers for some inspiration.