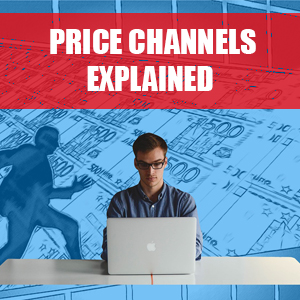 Channel trading is one of the most popular types of trading strategies in the forex currency market. A price channel is a pair of parallel lines that form a chart pattern for trading instruments such as forex currency pairs, stocks or commodities. Channels may be horizontal, ascending or descending. Price channels can quickly and easily be marked on charts to find potential areas where price may breakout or reverse. When the price passes through and stays through a channel representing support or resistance, the trend is said to be broken and there is a “breakout”. If price bounces from the channel then the market is said to be “reversing”. Price channels can also be used as possible stop loss and take profit levels. What I like about price channels is that they use what moves the markets – price, rather than relying on any lagging indicators.

What is a Price Channel?

As a rule, a price channel is a limited price range in which all its dynamics (movement) take place over a period of time. Price action trading is a very old methodology and can be utilised in any trading platform by simply applying two lines to the chart in order to create the price channel.

Forex channel strategies date back to long ago when the theory was put forward that the price is constantly moving in a certain range – known as the “price channel.”

Later, several most important price properties were identified that are still used in trade:

The rule of drawing a price channel is to identify the area in which the price is most likely to breakout or reverse from any of the price channel borders. After these postulates are applied, and the final values are obtained, trading channels were formed. There are primarily four types of price channels:

The price itself can have several directions:

If the buyers dominate the market, the price rises. Accordingly, they will not constantly buy, which means that sooner or later, there will be some lull, after which sellers appear, translating the price into a correction. After it passes a certain barrier, buyers come into business again – the course starts to rise again.

The forex channel strategy also sets some rules for the price:

If the price peak is slightly higher than the previous one, as well as each subsequent one, then the trend line goes up – there is an uptrend in the market. And, accordingly, it works the same way in the opposite direction. Let’s move on to building channels.

How to trade Price Channels?

The simplest forex channel has three points – two are located at its base (points where the price went and where it came, respectively). This is an equidistant channel.

Forex channel strategies with this type of channel are notable for their simplicity. And, by the way, the channel is not a trading strategy, but it’s component. The amplitude of the price movement can enable you to identify a trend in the market or lack thereof should the market be ranging.

As a general rule of thumb, resistance levels are the upper bounds, and support levels are the lower ones. We look for price to test these levels for trend trending or market reversals.

However, to reduce the factor of the above points, various other channels can be opened accordingly. For example, linear regression, the construction of which occurs with the help of extremes of boundaries. The channel itself is divided into two halves.

Forex channel strategies with this tool has some key features that we should pay attention to. For example, you should always monitor the location of the price near the midline. Above, there is an upward trend in the market. If a breakdown occurs from top to bottom, a signal appears that a short-term trend change has occurred. Most likely, a downward trend will begin soon.

However, note that reversals, bounces, as well as breakdowns, are likely. Next in line is the forex channel with a standard deviation. There is a huge difference between this and the previous channel. If linear regression is built directly at the price’s extremes, then the borders of this channel are located exactly in the center of the movement.

This type of channel can work well during a flat market when the price is located somewhere in the middle. Its peculiarity is that you can usually be sure that price more often than not will reach both the upper and lower borders, and more than once. However, we do not know when the trend will change, which is a very significant drawback.

The Fibonacci channel is a technical analysis that is used to estimate possible support and resistance levels that are based on the Fibonacci numbers. It is a variation of the Fibonacci retracement tool, except with the channel the lines run diagonally instead of horizontally.

A very simple strategy based on price channels is outlined below:

There are different types of price channels although equidistant channel are some of the most widely used primarily due to their simplicity. Price channels can be used for breakout trading and reversal trading.

I would prefer to draw price channels on the 1-hour charts and above. I tend to find that these charts contain less market noise than the lower time frames and thus give more reliable signals for my forex trading strategies. This also means that I spend less time staring at charts and can also set alert notifications to let me know when price has reached certain levels or a particular indicator value has been reached.

Forex price channel trading strategies are very popular and flexible to suit all different trading styles. Finding price channels on charts is the easy part. The key to success with a price channel strategy will most likely be timing your entry and your money management. Of course as with any trading strategy, it will be important to have a good trading plan and trading discipline with your emotions under control.

Furthermore, I would combine multiple technical analysis, fundamental analysis, price action analysis and sentiment analysis to filter all forex price channel strategy signals. You should trade forex in a way that suits your own individual style, needs and goals.

If you would like to practice price channel trading strategies, you can open an account with a forex broker and download a trading platform completely free of charge. If you are looking for a forex broker, you may wish to view my best forex brokers for some inspiration.