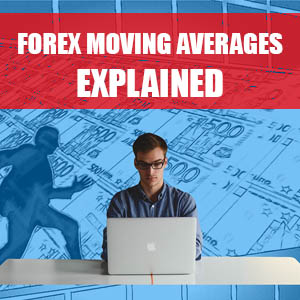 The moving average is one of the most used statistical indicators in forecasting price of trading instruments. In this article, we are going to explore moving averages and their effective use in forex trading.

What are the moving averages?

Moving averages are not always given for 20 periods. The number of periods can be chosen freely.

For example, the following chart shows a moving average for 200 periods. The calculation is based on the 200 periods preceding the current candlestick.

With moving averages, the price movements are “smoothed” and displayed as a line. This makes it easier for traders to interpret market information, such as the current trend direction.

There are four different types of moving averages:

The main difference between these different types of moving averages is how they are calculated. For this reason, they are shown differently on the course chart.

How to trade forex moving averages?

Traders can choose which direction to trade based on whether the price is above or below a moving average.

Note, however, that this is a subjective assessment. Each moving average refers to the period whose trend you are observing. Other moving averages on the chart should also be considered.

Based on these moving averages, a trader can identify not only the current short-term price trend but also the overarching longer trend.

How can a clear trend be defined using several moving averages?

A trader can use multiple moving averages to identify a clear downward or upward trend.

Because in a clear trend market, moving averages are further away from the price, the more periods they reflect. This can be seen in the chart below:

There are numerous variations in moving average trading strategies. However, we discuss multiple facets of moving average strategy that may help you in optimizing your trading.

There are no specific rules about the number of periods for which a trader should consider moving averages. The choice is up to each individual.

The shorter the period of the moving average, the faster it changes with the price. At the same time, moving averages for shorter periods offer less reliable information than those for more extended periods. A moving average for a longer period provides more reliable signals but reflects price changes much more slowly.

For example, the 20-period moving average shows the price movement for the last 20 periods, so it shows changes in the price direction very quickly. The downside is that traders often get the wrong signals about trend changes because sometimes short-term price peaks occur.

A 200-period moving average reflects price movements more slowly but also delivers fewer false signals. The disadvantage is that signals are given much less frequently due to the slower imaging.

A trend reversal can be identified by overlapping moving averages. Here, two moving averages are used for different periods to show the short-term and long-term price trend.

If short and long-term moving average lines cross, this may indicate a change in trend direction. Traders can use these crossovers to enter and exit the market at the right time.

The following chart shows a trend reversal from an upward trend to a downward trend. You can recognize this by the fact that the rapidly changing moving average line, which was only below the slowly changing line, crossed it. This shows an apparent reversal of the upward trend in prices.

Use moving averages as support and resistance

Moving averages are dynamic support and resistance levels as they change with price movements.

Hopefully you now of a clear understanding of what moving averages are and how they can be implemented within your forex trading. It could be a good idea to practice trading with moving averages on a demo trading account until you find a way to utilize them that suits your own individual trading style. If you need a broker to open an account with, you may wish to see my best forex brokers for some inspiration.