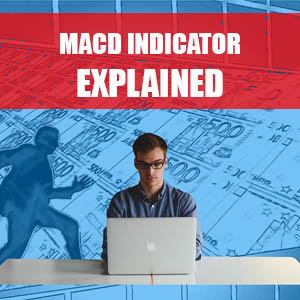 The MACD (Moving Average Convergence / Divergence) is a momentum indicator, launched in 1979 by Gerald Appel. The MACD calculates the difference between two exponential moving averages (EMA) and displays them in the form of a line. Most of the time, the MACD has an additional signal line (trigger). The MACD indicator can be used to define trend direction, strength, and several signals to buy or sell.

What is the MACD indicator?

As already mentioned, the MACD consists of 2 lines that are calculated independently of each other. The first line (blue line) subtracts the 2 exponential moving averages from each other. By default, the 26th average is subtracted from the 12th average. The numbers here represent the periods, i.e. the 26th average calculates its values ​​based on the last 26-time units. In the exponential moving average, however, the previous time-units are given more weightage.

The entirety of the two lines along with the scale then gives the MACD, which you can find in most charting software. The MACD often has a graphic display with candles in the background. These candles then show the difference between the two averages at a glance.

The individual values ​​of the MACD can, of course, be adjusted, but you should only change them systematically, i.e. test the change.

Advantages of the MACD Divergence strategy

Disadvantages of the MACD divergence strategy

How to trade with the MACD?

The simplest way of interpreting the MACD is understanding the trend direction. If the lines of the MACD rise, this signals an upward trend. Conversely, if the lines fall, this is a signal for a downward trend. However, it should be said that for such a signal, you can also put a simple moving average in the chart and do not necessarily need the MACD.

But if we look at other options, the whole thing becomes more interesting:

We can also look at the strength of the trend. Farther the 2 lines (MACD line and signal line), stronger is the prevailing trend. So, if the lines are close together, the trend is not as strong.

The divergences can also be used. If the MACD shows something different than the chart, then be alert that something is wrong. This may be the first sign of a trend reversal. It usually helps if you work with trend lines. We can, therefore, set a trend line in the chart and then in the MACD. If the two trend lines point in different directions, there is a divergence.

The opposite happens when there is convergence. Here the MACD and chart point in the same direction. In this case, the MACD indicator supports the picture of the chart.

To be able to use this strategy as a beginner, the MACD indicator and slow stochastics are used. The strategy can be applied on any time frame and on any trading instrument. This can and should be adapted to your trading skills as you gain experience.

If the price of an instrument is falling, look for the bears to halt and the price to start moving upwards. Then wait for MACD to point in upward direction. Take confirmation from slow stochastic indicator. The stochastic value should be under 30 which represents oversold conditions. Take a look at the chart below:

If the price of an instrument is rising, look for the bulls to halt and the price to start moving downwards. Then wait for MACD to point in downward direction. Take confirmation from slow stochastic indicator. The stochastic value should be above 70 which represents overbought conditions. Take a look at the chart below:

Practice trading with the MACD

Even the most experienced forex traders had to spend time mastering the MACD strategy. Historical charts can allow you to practice trading with the MACD indicator to see what signals were generated.

By using a demo account, the strategy can be tested and learned on safe terrain. Since the MACD strategies are modifiable, there is no fixed MACD strategy. This is another reason to test MACD strategy and MACD indicator before trading live to see what works best for you as every trader is different.

Since the path to becoming a successful trader is a long one, this should be taken into account from the start. The success of a trader took hours of learning, evaluating and deciding. Not to mention the ingenuity of money management and trading discipline.

The MACD indicator and the MACD strategy are not a complete trading system. The calculation is made from the moving, exponential average. The term MACD, i.e. moving average convergence/divergence, stands for the convergence or divergence of the average. In practice, the MACD indicator is connected to a signal line. The results of the MACD analysis can be made more efficient if they are combined with other indicators. The MACD is frequently used for a medium to long-term trend strategy.