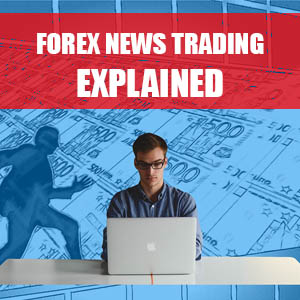 One of the benefits forex trading is that the market is open 24 hours a day, five days a week. Economic data is one of the most significant catalysts for short-range price movement in any financial market, and this is especially relevant to the forex market.

As a general rule, several pieces of economic data are released every day from the eight major forex traded currencies. Therefore, if you decide to trade forex on news releases, you’ll have access to numerous trading opportunities.

In this article, we’ll cover the economic news releases that are commonly traded by forex traders and how you can do forex new trading.

What is the major forex news to watch out for?

When doing forex news trading, the first is finding out significant financial news that would be released during the week and the essential data to watch out for.

Below are some of the most common economic releases of any country:

The relative significance of these news data may alter depending on what the present state of the economy is before their release. For instance, you may discover that trading the rate of unemployment may be more suitable than the interest rate decision in a particular month than in the other. Thus, it is essential for you to know the focus of the market at any particular time.

The key reason for trading the news is because of its ability to increase a currency’s volatility in the short term. Therefore, it is often the case that traders will look for news that has the biggest impact on the forex market. While the markets react mostly to economic news from different countries, some of the largest moves and most influential news in the forex market often comes from the U.S.

The eight key currencies for forex news trading are:

A few samples of the more liquid derivatives of these major currencies are:

The list of currencies that you can trade on news releases are really versatile. This makes it easy for you to handpick the currencies and economic releases that you want to trade. However, because the U.S. dollar is on the opposite side of the majorities and roughly 90 percent of all currency trades, U.S. economic releases commonly make the most impact in the forex market.

When doing forex news trading, the consensus figure report is essential together with unofficial and unpublished forecasts and the revisions of consensus report.

When to watch for the major countries’ economic news release

The table below illustrates a rough estimate of times in (EST) when the following countries releases their most significant economic data. You should pay attention to those times if you want to do forex news trading or just to be aware of fundementals that can impact all trading strategies. Some traders will even avoid trading around major news releases due to the volatility that can occur.

How long does the effect of news releases lasts?

The effects of the news release of economic data of these key currencies commonly last from between a few hours to one or two days. However, sometimes impact can last longer. There are also unexpected news events such as the CHF peg and Covid-19 which can cause longer lasting effects.

How to trade news releases

One of the most significant ways to trade news can be to search for a period of consolidation before a big number and to merely trade the breakout behind the number. You can do this on both a short-term basis in a single day (intraday) and on a day-to-day’s basis.

There are two key ways to do forex news trading. These are:

A more widespread news trading strategy is the non-directional bias approach. The non-directional bias trading approach does not take into consideration any specific direction and merely trades the market based on the fact that a large news report will generate a huge move. It doesn’t matter the direction the forex market moves. Your concern is to be there as soon as they are released and the market makes a move.

The implication of this is that as soon as the market makes a move in any of the two directions you’ll be planning to enter that trade. You don’t have any bias that the price will go up or down, and this is what gave it the name non-directional bias.

How you can trade the news with a directional bias

To illustrate this, we’ll make use of the unemployment rate and explain it in a simple way:

The first thing you ought to do before the news release is to watch the trend of the unemployment rate to observe whether it is increasing or decreasing. By looking at what has been occurring in the past, you can prepare yourself for what may occur in the future.

Because your anticipation is that the rate of unemployment will rise, you can begin to make preparations on how you can go short on the dollar. This is your directional bias. You could, in particular, decide to go short for the USD/JPY currency pair. Immediately before the release of the unemployment rate, you could view the price movement of USD/JPY roughly 20 minutes before and discover the range of movement.

Observe the high and low that has occurred. This will be your breakout points. The lesser the range, the greater the likelihood that a volatile movement may occur. Because you have a bearish outlook on the dollar which is your directional bias, you would pay special attention to the lower breakout point of that range. You are anticipating the dollar will fall. Therefore, you need to set a practical strategy at an entry point a few pips underneath that level.

You could then set a stop immediately at the upper breakout point and set your limit for the same number of pips as your breakout position range.

Either of these two situations could occur at this point.

One of the secrets to succeeding with a directional bias is your ability to know the concepts behind the news report you are planning to trade. If you lack a proper understanding of the effect on such currencies, you may trade with a few bad setups.

News trading with non-directional bias or the straddle trade strategy

This is a method of trying to take advantage of a news release without being aware of the direction that the market would go. This is possible when there is sufficient market volatility. The time you can get the required volatility is when the news such as economic data or central bank economic news is released. The foremost thing to do is to check the news reports you can trade.

In an ideal situation, you’d want to trade only those reports because they come with a higher probability of a bigger move after a news release. Your next move would be to view the range roughly 20 minutes prior to the actual news release.

Having prepared to trade the market in any direction, the next thing you need to do is to wait for the news release. Occasionally, you’ll observe that the market is triggered in one direction and within a short while it is inhibited due to a quick price reversal in the opposite direction. The best trading situation is when the trade is triggered only in one direction and the price moved continuously entirely in your favor to eliminate any form of loss.

Of course as with any forex trading system, your mid-long term success can depend greatly on other factors such as money management and trading discipline.

It is worth noting that the markets can be especially volatile around news releases and thus spreads can widen and orders can be delayed. I would personally always use an ECN forex broker for news trading with some of the best possible trading conditions.