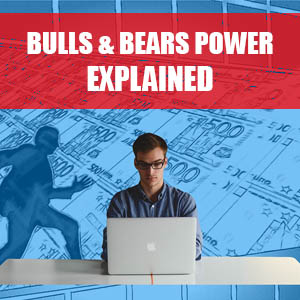 Two groups of traders are constantly present on the market, one of which is selling an asset and is known as the bears, whilst the other group of trader buying an asset are known as the bulls. Hence, this is where the terms bearish (down) and bullish (up) market come from. The balance of power between them is one of the important factors in determining the price dynamics of any financial instrument. Using the strength of bulls and bears power indicator, it is possible to identify in which direction the market is moving.

What are the bulls power & bears power indicators?

The bears power indicator values are calculated by subtracting the current candlestick from the low price of the EMA value. The essence of this formula is to demonstrate the strength of the bears about the average (by the method of the exponential moving average) price over a period of a given length. The low price is used in the formula because the bears push the quote down. Therefore, they determine the minimum prices.

The bulls power indicator calculation is performed by subtracting the high-price of the current candle from the EMA value. Thus, this formula demonstrates the strength of the bulls in relation to the price averaged over a given time interval by the EMA method. The formula uses high-price, as the bulls push the quote up, based on which, they determine the maximum prices.

How to use the bulls power & bears power indicators?

Both the indicators are drawn in the windows below the chart and displayed as histograms, the length and position of which relative to the 0 level of the columns indicates the relative strength of a particular group of traders.

Thus, the longer the histogram column of the bears power indicator:

Accordingly, the longer the histogram bar of the bulls power indicator:

The length of the histogram column, in turn, depends on the difference in price levels of the low and high of the current candle and the average price. Therefore, it is common to compare the lengths and column layouts of each indicator.

For example, if the columns on both indicators have almost the same length and are located in the positive zone, this indicates a strong uptrend (high- and low-prices of the current candle are much higher than the average price). Accordingly, when there are long columns in both negative indicators in the negative zone, this indicates a strong downward trend, since the current candle is completely below the average price.

It should be borne in mind that when installing a pair of indicators of the bulls and bears power on the chart, it is necessary to set the same calculation periods for them if you want them to analyse the same set of data.

In the following examples, bulls power is displayed in the lower base window, and bears power is displayed in the upper window. Blue segments indicate the dynamics of transactions. In chart below, the black vertical marks the candle, on which the bulls power columns began to move towards the negative zone, and the bears power columns, being in the negative zone, began to lengthen. This is a sign of a growing downtrend, so the next candle could make a sell off.

Selling on a downtrend by indicators of the strength of bulls and bears. In chart below, the candlestick on which the bulls power histogram is rising in the positive zone, and the bears power histogram have moved from the negative zone to the positive, which is a sign of an increasingly upward trend marked with a black vertical line. Therefore, the next candle could be a buying signal.

This trade closes in profit after the candle, marked with a red vertical, as the bulls power histogram moved to the negative zone on it, and the bears power bars began to extend in the negative zone.

Buying on an uptrend, according to the signals of the bulls power and bears power indicators. The described technical analysis tools have the properties of oscillators, so you can look for divergences on them that indicate a likely trend reversal:

Bulls power and bears power indicators can be used well together. The core benefit of these technical indicators are that they can be used to identify the strength of trend. However, you may pre-empt the reversal of a trend quite early through divergence.

The methods of implementing the bulls power and bears power indicators into a trading strategy that are outlined within this article are just ideas. I would always ensure that I have good money management, trading discipline and a trading plan when using any forex strategy.

If you would like to practice trading with the bulls power and bears power indicators, you can open an account with a forex broker and download a trading platform. If you are looking for a forex broker, you may wish to view my best forex brokers for some inspiration.