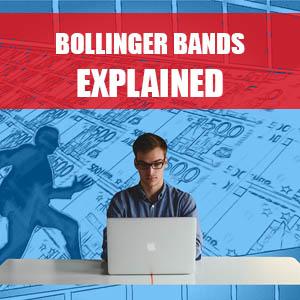 The invention of the Bollinger Bands indicator belongs to the American analyst John Bollinger, who in 1984 set out to create his system for analyzing and calculating investments. Having spent about seven years on this, in the early 90s, Bollinger introduced his method to the investment and trading community. Quite quickly, the indicator gained popularity among market participants, and was adopted by many traders and is still used today. Currently, John Bollinger is the owner of the financial company Bollinger Capital Management Inc., which utilise the methods developed by him.

What is the Bollinger Band Indicator?

The idea of ​​Bollinger Bands is to combine a trend indicator, a volatility indicator and an oscillator. The bars indicate the direction and range of price fluctuation on the chart, taking into account the trend and volatility characteristic of the current market phase. Graphically, the indicator consists of three lines: a moving average in the middle, characterizing the main direction of movement, and two lines that limit the price chart on both sides and describe its volatility.

The upper and lower lines are the same moving average but shifted by a few standard (mean square) deviations. As the extent of the standard deviation depends on volatility, the bands themselves modify their width. In essence, it increases when the market is unstable, for example, during the publication of news, and decreases in more stable periods. Thus, the indicator implements the functions of the oscillator in a more convenient form, when you can immediately evaluate the state of overbought or oversold.

How to trade the Bollinger Band indicator?

John Bollinger, in his book Bollinger on Bollinger Bands, explains that his indicator is not intended for continuous analysis of price movements. It is impossible at any time to look at the indicator and conclude about the further behavior of the tool. But at specific points in time, the indicator gives signals that, by themselves or in conjunction with other methods of analysis, allow you to identify potential trading opportunities.

The following features are characteristics of Bollinger Bands:

The following are some of the most common trading strategies based on Bollinger Band indicator.

Buying/selling in a trend after pullbacks.

When the instrument is in a stable directional trend, Bollinger Bands help identify the point at which it is most safe to enter after a pullback. As a rule, when there is a trend up, the price chart is between the middle and upper Bollinger line. Then you can buy at a time when the price will roll back and approach the bottom line. Moreover, a good confirmation signal will be if the price at this moment builds not a diagonal, but horizontal correction. In this case, the probability of a profitable transaction is higher, and you can use a short stop to support consolidation. To exit with a profit, you can use the point at which the price crosses the middle line in the opposite direction or other targets.

The same is true for the downtrend.

Quite often, before a strong movement, the instrument is characterized by low volatility. At these moments, there is an uncertainty that does not allow buyers or sellers to gain the upper hand and significantly shift the price. When certainty sets in (it can be news, an important level breakdown, or the arrival of a major player), those who find themselves on the wrong side are forced to close their positions in a hurry, giving the movement an impetus.

On the graph of this situation, the compression of the Bollinger lines before the movement will correspond. Here, the indicator does not give direction but shows the moment when you need to be careful and look for the entry point. As a rule, if after compression, the price breaks one of the extreme lines, then in this direction, the movement will develop. However, such a signal can be very late, so it is desirable to use additional signals for input.

Bollinger suggests using their stripes to more accurately identify classic technical analysis figures. For a “double bottom” bottom, the first minimum should be below the bottom line, and the second should be at or above the bottom line. At the same time, an additional signal will be a decrease in volumes at the second minimum. Similarly, the analysis is carried out for the “double top”.

In addition to conventional methods of application, many trading systems use combinations of Bollinger Bands with other indicators: RSI, MACD, MFI, Parabolic SAR, etc. Bollinger himself in his book even suggested building bands not for the price chart, but the RSI chart and used the resulting signals. Thus, Bollinger Bands provide enormous scope for building various trading systems.